Acceleration 2014 is a thrilling new event concept, which created a lot of buzz around Europe even before the season opener in Portugal at the end of April. A one-of-a-kind combination of motorsports and live music acts make the ten events in ten European countries a unique experience not only for racing or music fans.

The highlight among the mega events, including motorcycle (European Stock series), pickup (MW V6 Pickup series) and American car (Legend Supercup) races, is the Formula Acceleration 1. The FIA authorised series is contested by 550hp V8 vehicles used in the former A1 GP series (World Cup of Motorsport) within a Nations Cup. 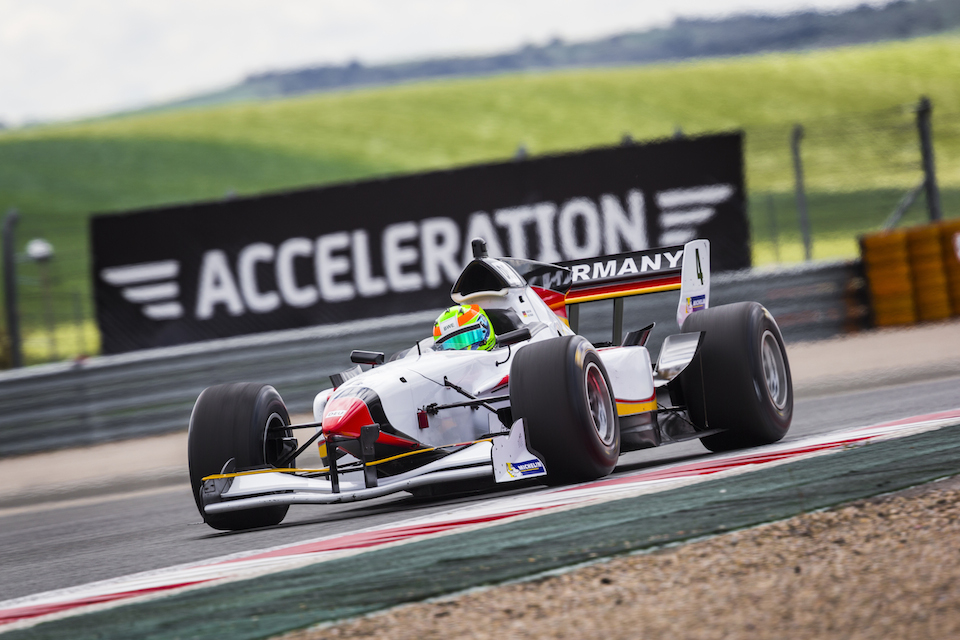 The GP3 Series, or GP3 for short, is a single seater motor racing series launched in 2010 as a feeder series for the GP2 Series, introduced by GP2 organiser Bruno Michel.

GP3 follows the entire European leg of the Formula One series and the GP2 series as a support race for the two. In 2012, the series visited the Monaco street circuit after 2 years of attempts, as they were always unable to beforehand due to lack of room. Like the GP2 series, GP3 gives drivers the experience of the Grand Prix environment, and takes advantage of the infrastructure, such as marshals and medical facilities, in place for the Formula One events.

Many drivers have since stepped up to GP2 since the series began, with the 2010 champion Esteban Gutiérrez, Pål Varhaug and ninth place finisher Stefano Coletti being the first to do so for the 2011 season. 2011 champion Valtteri Bottas did not follow suit however, and instead joined Williams F1 as a reserve driver. Meanwhile James Calado, Rio Haryanto, Simon Trummer, Tom Dillmann and Nigel Melker all joined GP2 for the 2012. Other drivers who have graduated to other series are James Jakes who moved to the IndyCar Series for 2011, Josef Newgarden to the Indy Lights series in 2011 and Alexander Rossi and Robert Wickens who moved to the Formula Renault 3.5 Series in 2011 and Lewis Williamson in 2012.

In the series short history, four drivers have gone on to compete, or are competing in Formula One currently after GP3. These include former champions Gutiérrez and Bottas for Sauber and Williams respectively, Jean-Éric Vergne and Daniil Kvyat for Toro Rosso.

The GP2 Series, GP2 for short, is a form of open wheel motor racing introduced in 2005 following the discontinuation of the long-term Formula One feeder series, Formula 3000. The format was conceived by Bernie Ecclestone and Flavio Briatore, while Ecclestone also has the rights to the name GP1. In 2010 the GP3 Series class was launched, as a feeder class for the GP2 series.

Designed to make racing affordable for the teams and to make it the perfect training ground for life in Formula One, GP2 has made it mandatory for all of the teams to use the same chassis, engine and tyre supplier so that true driver ability is reflected. All but three races have taken place as support races at Formula One race weekends to boost the series‘ profile, to give drivers experience on the Grand Prix environment, and to take advantage of the infrastructure (marshalls, medical facilities etc.) in place for a Formula One event. GP2 mainly races on European circuits, but has appearances on other international race tracks as well with their most recent races in the 2012 season at the Sepang International Circuit in Malaysia and the Marina Bay Street Circuit in Singapore.

Many drivers have used GP2 as a stepping stone into Formula One. The 2005 Champion Nico Rosberg was hired by the Williams team for the 2006 F1 campaign, 2006 GP2 winner Lewis Hamilton made the transition to F1 the following year with McLaren and the 2007 Champion Timo Glock to Toyota for the 2008 F1 season. 2009 GP2 champion Nico Hülkenberg moved up to a Williams F1 race driver in the 2010 Formula 1 season. In addition, all runners up —Heikki Kovalainen (2005), Nelson Piquet, Jr. (2006) and Lucas di Grassi (2007)— became Renault test drivers the following year. All three earned F1 seats, but have since been replaced.

Karun Chandhok, Bruno Senna and Vitaly Petrov were also granted an F1 seat in 2010. For 2011 Pastor Maldonado was granted the hot seat at Williams. This meant that Nico Hülkenberg was deposed by Williams. Sergio Pérez was given the drive alongside Kamui Kobayashi, another former GP2 driver and GP2 Asia Series winner, at Sauber. Jérôme d’Ambrosio got his Virgin Racing drive for the 2011 season. However, some drivers have reached Formula One without competing in GP2, for example Paul di Resta, Daniel Ricciardo, Jean-Éric Vergne, Valtteri Bottas, Kevin Magnussen and Daniil Kvyat.

During 2011 it was announced that in 2012 the GP2 and GP2 Asia Series would combine to make a single, longer GP2 series.

Formula One, also known as Formula 1 or F1 and referred to officially as the FIA Formula One World Championship, is the highest class of single-seater auto racing sanctioned by the Fédération Internationale de l’Automobile (FIA). The „formula“, designated in the name, refers to a set of rules with which all participants‘ cars must comply. The F1 season consists of a series of races, known as Grands Prix (from French, originally meaning great prizes), held throughout the world on purpose-built circuits and public roads. The results of each race are evaluated using a points system to determine two annual World Championships, one for the drivers and one for the constructors. The racing drivers, constructor teams, track officials, organisers, and circuits are required to be holders of valid Super Licences, the highest class of racing licence issued by the FIA.

Formula One cars are the fastest road course racing cars in the world, owing to very high cornering speeds achieved through the generation of large amounts of aerodynamic downforce. Formula One cars race at speeds of up to 350 km/h (220 mph) with engines currently limited in performance to a maximum of 15,000 RPM. The cars are capable of lateral acceleration in excess of five g in corners. The performance of the cars is very dependent on electronics – although traction control and other driving aids have been banned since 2008 – and on aerodynamics, suspension and tyres. The formula has radically evolved and changed through the history of the sport.

While Europe is the sport’s traditional base, and hosts about half of each year’s races, the sport’s scope has expanded significantly during recent years and an increasing number of Grands Prix are held on other continents. F1 had a total global television audience of 527 million people during the course of the 2010 season.

Grand Prix racing began in 1906 and became the most popular type internationally in the second half of the twentieth century. The Formula One Group is the legal holder of the commercial rights. With annual spending totalling billions of US dollars, Formula One’s economic effect and creation of jobs is significant, and its financial and political battles are widely reported. Its high profile and popularity have created a major merchandising environment, which has resulted in great investments from sponsors and budgets in the hundreds of millions for the constructors. Since 2000 the sport’s spiraling expenditures have forced several teams, including manufacturers‘ works teams, into bankruptcy. Others have been bought out by companies wanting to establish a presence within the sport, which strictly limits the number of participant teams.